Hooray! Our annual summer meeting will be
🔹IN PERSON🔹
at a charming home in Santa Monica
* * * * *
It’s Summertime, and Sholem is easy.
Potluck is calling, and the company is fine.
Community is meeting, to plan the next season,
So mark your iCal – the fourth Saturday of July.To be more specific, it’s the 24th, 10:30-ish.
Prepare some food, bring your family along.
Our kids can be swimming, while we are a-thinking.
At Jan & Jerry’s, great to gather again after so long!

We celebrate our ability this past year to rebound and connect with so many members and new members across So Cal and beyond. All school parents and community members are encouraged to come together to learn what’s planned and share ideas for Sholem’s 2021-2022 year. Bring something for the potluck brunch; bagels & coffee will be provided. Kids are welcome to hang out and take a dip in the pool – bring your own towels and plan to supervise them.

RSVP dan@sholem.org to confirm attendance
Simply write RSVP – YES in the subject line, to simplify communication.
Address will be provided upon receipt of your RSVP. 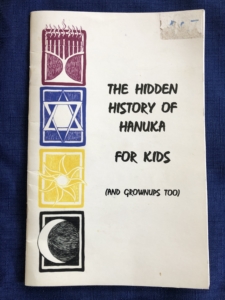 The Hidden History of Hanuka for Kids
(and Grownups too)

Written by Hershl Hartman, Sholem’s Education Director, with original illustrations by Amy Goldman Koss. This is a wonderful introduction to Hanukkah (or more simply, Hanuka) for secular families and individuals. In clear and concise descriptions, one learns about the often unknown ancient history, the story of the magic oil jar, other winter festivals of lights, plus about games, food and more. Especially geared for children but equally appealing to adults.
Hidden History of Hanuka 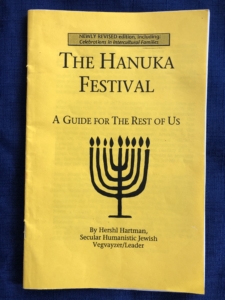 The Hanuka Festival- A Guide for the Rest of Us

Jewish and intercultural families cannot be convinced that Hanukkah (khanike in Yiddish) is a reasonable substitute for the tinsel, glitter and sentimentality that surround Xmas, the American version of Christmas that has virtually engulfed the world.

Accordingly, it is not the purpose of this booklet to help project khanike as an “alternative Xmas” but, rather, to provide non-observant Jewish and intercultural families with a factual understanding of the festival’s origins and traditions so that it may be celebrated meaningfully and joyously in its own right.

Why “…for the rest of us”? Increasingly, Jewish Americans are identifying with their ethnic culture, rather than with the Judaic religion. At the same time, Hanuka is being projected more aggressively as a religious holiday, focused on the “Miracle of the Lights,” purporting to celebrate “history’s first victorious struggle for religious freedom,” to quote the inevitable editorial in your local newspaper. Actually, as we shall see, Hanuka is nothing of the sort. The issues of “religious freedom” vs. “national liberation” vs. “multicultural rights” were actually confronted back in the second century B.C.E., albeit with other terminology. This booklet seeks to separate fact from fancy so that those who identify with Jewish culture will not feel excluded from celebrating the festival.

Now, about the matter of spelling. The “right” way to spell it is: הכּונח . What is the “best” way to transliterate the Hebrew into English? The earliest “official” form was Chanukah or its confusing variants: Channukah and Chanukkah. Hearing non-speakers of Yiddish or Hebrew saying “tcha-noo-ka” convinced the arbiters of these things to try Hanuka and its variegated versions:

Hanukah, Hannukah, Hanukkah, etc. None of these approximate the Yiddish (Ashkenazic) pronunciation for which there is a transliteration standard: khanike. That’s the form that most satisfies the author, although he has bowed to common practice in this booklet. You are free to make your own choices. The right to be different is part of what khanike is all about…
—Hershl Hartman.

The Hanuka Festival For the Rest of Us