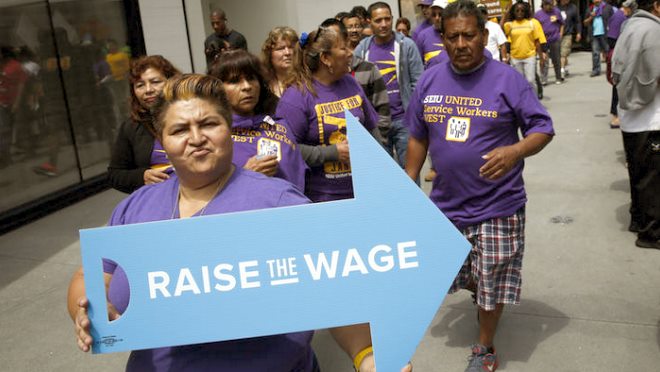 I see that unions, led by the Service Employees International Union, are out in full force championing the $15 an hour minimum wage. Business leaders scoff at this. But about nine million workers carry full-time jobs, working 40 hours a week, and still live below the poverty line.

Now, that’s something to really scoff at! But even if these employees were able to achieve the $15 wage, the inequities in income between the top one percent and ordinary working families would still be a Herculean stretch. Workers are like cliff scalers in Yosemite, peering up El Capitan, but without cleats, climbing ropes and tax shelters.

The Washington Post reports that the average CEO earns just over 350 times as much as the work force below. Those executives need to come down from the stratosphere and breathe real air.

If we truly want to make that happen, how about joining the new $15 minimum wage with a $15 million maximum income? Could CEOs somehow manage to subsist on that? I think so. And then all of us could live pretty comfortably and in relative equality. Wouldn’t that give us a new New Deal for contemporary times? It’s a deal that could sweep from the table the rickety house of cards that we call the free enterprise system.

That system, the mainstream media keep telling us, creates the greatest possible benefits because anyone can be a big success. All you need do is have initiative and drive. What they fail to mention is that the card deck they’re using is stacked. If your family name is Gonzales or Chang and you mobilize your initiative and drive, statistics tell us there’s an outside chance your lot will improve in going from one generation to the succeeding generation. But, if your family name is Trump or Buffett, all the initiative you need for success is to pick up the phone and say, “Hello, Dad?

The trickle down theory holds that when financial elites heap up profits, good stuff cascades down to poor folks at the bottom. What I’ve seen trickle down is meager jobs and hardly-livable housing. Mansions never seem to trickle down.

According to the catechisms of capitalism, a lucky break for Jr. is really also good news for all working stiffs. That’s because of a rosy premise: What helps the very rich rake in billions helps everybody. They have a slogan for this—”A rising tide lifts all boats.” The only hitch here is that news is totally useless to people at the bottom who can’t afford a boat. It would be no surprise to see the eager slogan-makers go on to promise even greater useless news—the tide will also wash off your Lexus. Capitalist tenets also dull our senses by touting the “wonders” of trickle down theory. That theory holds that when financial elites heap up profits, good stuff cascades down to poor folks at the bottom. What I’ve seen trickle down is meager jobs and hardly-livable housing. Mansions never seem to trickle down.

Ironically, workers struggling to push forward against an unjust headwind often act counter to their own interests. Folks without the boat, without the Lexus, and probably underwater on their mortgages, courtesy of the last “rising tide,” somehow oppose programs that would throw them a life raft. It’s a real eyeblinker that, over and over, workers oppose legislation and programs that would benefit their circumstances and, instead, support ideas that are to their detriment. A leading example of this is workers backing “right to work” legislation, which, despite its euphemistic tonality, amounts to the right to demolish unions.

Corporation honchos have convinced workers that unions are bad for them. It’s like, “Listen up, cold season is coming on—make sure you don’t take any of that nasty Vitamin C.” So, many workers have been hoodwinked into believing that paying dues to a union to raise their income is tyranny, but letting the boss unilaterally dictate their salary is freedom. Go figure. Here’s a favorite quote of mine from Upton Sinclair that helps explain things: “It is difficult to get a man to understand something when his salary depends on him not understanding it.” Corporations nowadays are into school reform that privatizes our public education system and gives them more leverage in determining the kind of education they want to have understood.

Corporate behemoths also have shifted to doing direct educational communication on their own. Thanks to the Citizens United decision, corporations—which when I was a kid used to be gleaming skyscrapers downtown—are now people, with legal rights of “free speech.” Before Citizens United, the speech guaranteed to corporations allowed them to tell you to buy a car you couldn’t afford. Now their speech amounts to big money for political commercials explaining that unions are against the best interests of the public and working people. In both cases, if you buy into what the corporations are selling, you get a lemon—one that’s sour for you, but real sweet for them.

I know my proposal for a $15 million wage maximum isn’t going to cause elation at Fox News and take off big in a stalemated America. Whatever brings real benefits to people at the bottom is somehow made to seem divisive and to trumpet the sound of class warfare. But there’s worth in pushing this remedy for inequality into the national dialogue. A trumpet blast might create a breeze that over time topples our tilted house of cards and makes way for a more balanced one. That would be a house of democracy, having a solid foundation and a proper roof.

I know the lords of finance won’t be the least bit interested in providing us a mortgage for that edifice. We just will have to meet at Home Depot instead of Chase Bank and begin to build the house ourselves.

UCLA Professor Emeritus, Jack Rothman, performs stand-up comedy for political and civic groups on invitation to provide a bright spot at meetings burdened by too much gravitas. (jrothman@ucla.edu) He has also appeared at the Comedy Store, Ice House, the Improv Hollywood, and assorted nondescript pubs.