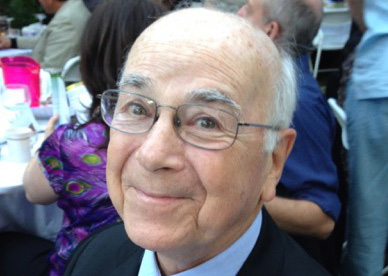 David Finkel, a longtime member of the Sholem Community, died July 4, 2015. He will be remembered for his compassion and as a “warrior for justice.” Family members are planning a public memorial at 1pm on August 30, 2015 at the Broad Stage, 1310 11th Street, Santa Monica, CA. RSVP to wcolter@ymail.com. In lieu of flowers, the family encourages the public to contribute to the Judge David B. Finkel Social Justice Scholarship at Santa Monica College.

Honoring the Life of Judge David B. Finkel
by Amy Shimshon-Santo, Ph.D., a daughter of David Finkel

Judge David B. Finkel, a veteran civil rights attorney and Santa Monica city councilman whose career included six decades of battles for civil rights, freedom of speech, affordable housing, and educational equality, has died following a prolonged illness. He transitioned peacefully, in the company of family, while fireworks lit up the night sky. He was 83.

Finkel, the son of Jewish immigrants who suffered persecution in Europe, was a lifelong advocate for social justice who was elected to the Los Angeles County Superior Court in 1990 and later to the Santa Monica College Board of Trustees. His work as a lawyer included advocacy during the Freedom Summer in Mississippi in the 1960s, and defense of conscientious objectors during the Vietnam War.

Finkel’s values were shaped early on by his immigrant parents, the hardships of the Great Depression, and the rise of fascism during World War II. As a young man, his thoughts and actions emerged in response to McCarthyism, and were inspired by the momentum of the Civil Rights, Anti-War, and Women’s Movements. He was a humble man who consistently found himself in the center of controversy.

Born in Newark, New Jersey on February 2, 1932, Finkel was the second of two sons of Reva Mucha Zwolinski from Odessa and Sidney Finkel from Pitkamien, in what were then the Soviet Union and the Austro-Hungarian Empire. Like many Jews of his generation, Finkel was given the non-Jewish middle name Bruce that could double as a last name in case of religious persecution.

As a boy, Finkel served as Bal Torah at Temple B’nai Abraham under the outspoken Rabbi Joachim Prinz who was President of the American Jewish Congress (1958-1966) and advocated for Jewish solidarity with black liberation as a speaker at the 1963 March on Washington. Not surprisingly, Finkel defined his Jewish identity as synonymous with understanding struggle. His own family’s experiences became a springboard for a life committed to social justice causes.

Finkel and his family were victims of redbaiting during the Cold War. His mother’s life was disrupted when she was brought before the House Un-American Activities Committee. He served in the U.S. Army at the time and was accused of being a security risk when he refused to sign the loyalty oath that would have forced him, in effect, to renounce his own mother. His case went to the U.S. Supreme Court where he argued that a son should not be forced to choose between the 10th Amendment to honor country, and the 10th Commandment to honor family. He won the case and the U.S. Supreme Court held the practice unconstitutional.

While Finkel completed his undergraduate studies at the University of Chicago in 1951, without problem, his graduate studies were disrupted during the Cold War due to harassment for his beliefs. After winning the loyalty oath case, he was readmitted to USC where he completed his J.D. in 1959. Finkel was admitted to the bar in 1960 and joined the civil liberties law firm of Margolis and McTernan who argued influential cases including the Sleepy Lagoon case retold in the play and film Zoot Suit by Luis Valdez and Teatro Campesino.

Finkel came into adulthood in Mississippi during Freedom Summer in 1964 volunteering with the National Lawyers Guild. His first assignment was to search for Andrew Goodman, James Chaney, and Michael Schwerner, three students and civil rights workers who had gone missing the day after he arrived. He was on the team that called President Johnson to send the U.S. Navy to continue search for the civil rights workers who were eventually found murdered and buried on a farm near Philadelphia. After two state juries acquitted the case, including Deputy Sheriff Price, seven of eighteen defendants were eventually convicted of civil rights crimes in federal court, which opened the door for legal civil rights victories in Mississippi. Finkel served on the legal team that challenged the “one person, one vote” principle since black Americans were consistently denied the right to vote. He later served a period as President of the National Lawyers Guild.

Finkel partnered with progressive attorneys including Hugh Manes, Neil Herring, Frank Munoz, Charles Stewart, and Bob Newman. They tried cases representing labor unions including the International Longshore and Warehouse Union (ILWU), the Borax Workers, and represented professors and teachers on freedom of speech and discrimination cases. Deena Metzger recalls, “David represented me in the academic freedom case, Board of Trustees of the Community Colleges vs. Deena Metzger in 1969. He won that Superior Court academic freedom case and the challenge in the State Supreme Court, in his words, ‘Teaching the English lesson to the State of California.’ Keeping his word, he went on to defend many other teachers. David always came from the heart, was profoundly ethical, and deeply thoughtful.”

Finkel provided counsel defending many conscientious objectors during the Vietnam War. He served as the attorney for the Los Angeles Chapter of the Congress for Racial Equality (CORE) directed byhis dear friend architect Arthur Silvers. He was active in the No on 14 campaign that challenged the racist practices of redlining in housing. Finkel explained, “They would invite white couples and black couples to rent a place. Then I would sue the landlord and get a court order demanding they lease the apartment.” During that time, Dr. Martin Luther King made a special visit to Los Angeles to support the chapter’s efforts.

Finkel served as the President of thePacifica Foundation in the 1970s during a time of social upheaval in the country. Pacifica was the first listener-sponsored radio station in the nation and was committed to listener driven programming that opened spaces for minority viewpoints. During his tenure, two local radio stations in the network received recordings from Patty Hearst and the Symbionese Liberation Army. Finkel provided leadership for the Foundation when Will Lewis was jailed for not turning over the tapes to the Federal Bureau of Investigation.

As a resident of Santa Monica, he became involved in local politics and was a founding member of Santa Monicans for Renters Rights (1981).He was elected to the Santa Monica Rent Control Board in 1983, and elected to the Santa Monica City Council in 1986 where he served a period as Mayor Pro-Tempore. Denny Zane, Executive Director of MoveLA, worked alongside Finkel on the council. Zane wrote, “Finkel had a deep appreciation for the arc and art of democracy which gave both him both patience and a serene perseverance. I will never forget how close he came to convincing the chair of the Senate Judiciary Committee that the Ellis Act was just a bad idea. He had an honest regard for political friend and adversary alike and a unique combination of intellect and gravitas that ensured that he would always be taken seriously. David should be remembered as a warrior for justice.”

Finkel was elected to the Los Angeles Superior Court in Santa Monica (1984) where was a member of the California Judges Association Judicial Ethics Committee, serving as an ethics teacher and advisor to other California judges. Judge James Bianco states, “He was such a humble man that most lawyers and fellow judges never knew of the incredible things he had done in his life and legal career. He conducted himself on the bench the same way he lived the rest of his life — with integrity, patience, kindness, and in service of his ever-present principle of doing the right thing. When he became my mentor it was a turning point in my life. He taught me more than how to be a good judge. He taught me about being a great person.”

Upon retirement from the bench, he was offered teaching positions at University of Southern California (USC) and the Santa Monica College (SMC), but accepted the post at SMC in 2002 because he felt he was most needed in the community college system. Finkel offered classes in political science focusing on his passion for constitutional law. He was recruited and elected to the Santa Monica College Board of Trustees where he served from 2006 – 2014 under the condition that he would be permitted to continue to volunteer part-time in the classroom. He loved working with students – especially those first generation students whose tenacity he admired for successfully juggling work and study. Rob Rader, Chair of the SMC Board of Trustees, remembers Finkelas a beacon of goodness. “I will always recall not just his calm and thoughtful demeanor, but his commitment to students, to teaching, to making the world a better place. He was truly a great man…blessed is his memory.”

Los Angeles County Supervisor Sheila Kuehl wrote, “I so loved and admired David Finkel. He was a gentle man, a passionate advocate, a man in love with justice and a friend. He will be greatly, greatly missed.”

Finkel’s life was uplifted by a deep love and partnership with his wife of 51 years, feminist artist and activist Bruria Finkel. The couple has been a respected resource for progressives in Santa Monica, and they have been honored by organizations including the Church in Ocean Park, and the Sholem community. He was a dedicated father and grandfather. Finkel is survived by his wife Bruria Finkel, his brother George Finkel, his children Melva Colter, Wendie Colter, Amy Shimshon-Santo, and Adam Finkel, and his grandchildren Avila Santo, Reva Santo, Rose Colter-Knight, and Reave Finkel