“The Hanuka Festival- A Guide for the Rest of Us” 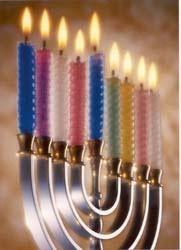 Jewish and intercultural families cannot be convinced that Hanukkah (khanike in Yiddish)is a reasonable substitute for
the tinsel, glitter and sentimentality that surround Xmas, the American version of Christmas that
has virtually engulfed the world.

Accordingly, it is not the purpose of this booklet to help project khanike as an “alternative Xmas”
but, rather, to provide non-observant Jewish and intercultural families with a factual
understanding of the festival’s origins and traditions so that it may be celebrated meaningfully
and joyously in its own right.

Why “…for the rest of us”? Increasingly, Jewish Americans are identifying with their ethnic
culture, rather than with the Judaic religion. At the same time, Hanuka is being projected more
aggressively as a religious holiday, focused on the “Miracle of the Lights,” purporting to
celebrate “history’s first victorious struggle for religious freedom,” to quote the inevitable editorial
in your local newspaper. Actually, as we shall see, Hanuka is nothing of the sort. The issues of
“religious freedom” vs. “national liberation” vs. “multicultural rights” were actually confronted
back in the second century B.C.E., albeit with other terminology. This booklet seeks to separate
fact from fancy so that those who identify with Jewish culture will not feel excluded from
celebrating the festival.

Now, about the matter of spelling. The “right” way to spell it is: הכּונח . What is the “best” way to
transliterate the Hebrew into English? The earliest “official” form was Chanukah or its confusing variants: Channukah and Chanukkah. Hearing non-speakers of Yiddish or Hebrew saying “tcha-noo-ka” convinced the arbiters of these things to try Hanuka and its variegated versions:

Hanukah, Hannukah, Hanukkah, etc. None of these approximate the Yiddish (Ashkenazic)
pronunciation for which there is a transliteration standard: khanike. That’s the form that most
satisfies the author, although he has bowed to common practice in this booklet. You are free to
make your own choices. The right to be different is part of what khanike is all about… —Hershl Hartman.